I took some time to update the 2020 mod to the standards of my 2021 mod. It now contains all the new stuff like driver-specific helmet shapes, team-specific rims, full tank tweak and no-refueling animation, updated car collision model, realistic physics and so on.
Also i have added a standalone (non-csm) version of the mod.

- Some fixes in Gpaedia, some other minor fixes.

Thanks to Haze Racing Desing, we have the Skahir helmet for George Russell now in the mod!
You need to download and install only the file F1 2020 update 1.01.cmu.

The final version (so far...) of the mod is here. Many people have worked on it over the last few weeks. I probably don't remember all changes that were made, but here are some:

- Updated full 3D cockpit interior, added antennas, updated views for cut-halo and no halo
- New full 3D steering wheel for cockpit view with "moving" 3D-elements, updated external steering wheel, gloves and arms (please note, i have removed all team specific steering wheels as i wasn't happy with the quality anymore. the option and the folders are still in the mod, so you can add your own steering wheels if you like)
- Updates to the CSM structure
- New track specific liveries for Haas and Alpha Tauri by Fongu
- New track specific helmets for Piere Gassly (Imola), Lando Norris (Silverstone) and Aitken (Sakhir) by Fongu
- New intro (watch it, it's worth it!


PLEASE NOTE: YOU NEED TO DOWNLOAD AND REINSTALL PART 1 AND PART 2! PART 3 IS OPTIONAL, IT CONTAINS LOW RESOLUTION TEXUTRES.

If somebody could make the helmets, we get close to the final version.

Changes:
- Updated performance files up to Yas Marina
- Some minor fixes
- Added the option to change the number of mipmaps in the mod: 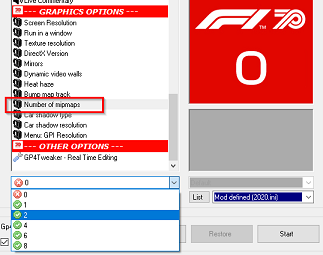 www.imaginationtech.com dijo:
What is mipmapping?
Mipmaps are smaller, pre-filtered versions of a texture image, representing different levels of detail (LOD) of the texture. They are often stored in sequences of progressively smaller textures called mipmap chains with each level half as small as the previous one.
They are used for situations where the distance between an object and the camera can change. As the object gets further from the camera, the object’s texture will eventually appear smaller on-screen than its actual resolution, in other words, there will be more than one texel (pixels of a texture map) per screen pixel. The texture will have to be scaled down in a process called minification filtering, which often requires the application to sample multiple texels to decide on the colour of a pixel. This becomes a problem when you need to sample the entire texture at runtime for an object that could only be a single pixel wide.
This is where mipmaps come in. Instead of sampling a single texture, the application can be set up to switch between any of the lower resolution mipmaps in the chain depending on the distance from the camera.
Hacer clic para expandir...

I'm not an expert, but in my case (probably due to a high-res screen) setting mipmaps to 0 improved my image quality and also solved the issue where some textures were flickering from time to time. I'm not sure it helps for you, but i think it's worth giving it a try.